What Happens if Mother Breach a Family Court Order?

It can be a serious issue if a Mother Breaking Court Orders Uk in the UK. In the UK, family orders are taken seriously and must be followed. A court order is a legal document that outlines what a mother must do to comply with the court’s ruling. If a mother ignores a court order, it can have serious consequences. The court may order that the mother pay a fine, spend time in jail, or pay for any damage done due to her breaking the court order.

In some cases, the court may also make a restraining order against the mother, preventing her from having any contact with her children. No matter what the court order is, it must be followed. Ignoring court orders can have serious consequences, so mothers should always comply with any orders from the court.

Is Breaching a Court Order a Criminal Offence?

In the United Kingdom, breaching a court order is a criminal offence. It is taken very seriously as it is seen as a deliberate act of defiance against the criminal justice system.

In all cases, the police will investigate to determine if the breach was deliberate or accidental. The person will be required to pay a fine or serve a custodial sentence if convicted. Breaching a court order is a serious offense, with any orders issued by the court.

Can You Stop Family Court Proceedings?

Yes, you can stop family court proceedings in the UK, but it depends on the circumstances. The court will consider any changes in circumstances or new evidence that might impact the proceedings.

Ultimately, the court will decide on whether or not to proceed based on the evidence presented and the best interests of any children involved. If you do wish to suspend proceedings, it is important to provide as much relevant evidence as possible.

Solution To Your Problem

When it comes to parenting, sometimes things don’t go as planned. Especially when one parent is not following the court-ordered agreements between both parties. In some cases, the mother does not follow the orders, and this can result in problems for the father trying to see their child. This was recently seen in a case out of Great Britain, where a mother broke several court orders and refused to let the father see their child.

Thankfully, with the help of Kqsolicators lawyers, the father was finally able to see their son after six months of being denied access. While this may be an extreme example, it is important for all parents to understand what they must do to abide by court-ordered agreements. If you struggle to adhere to such an agreement, please contact Kqsolicators for help. You don’t have to go through this alone. 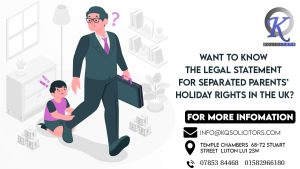